It’s a Saturday night in a city center, and we’re back at a gig with ridiculously early doors. We almost missed the first act, what with buses and storms, but we made it, more or less intact.  What have people got against late nights?

Some of the best gigs we’ve ever seen have rocked into the wee small hours and they’ve only benefited from it. The last time we saw the Oh Sees they had to be dragged from the stage at 1.30 and they were not happy about it.

There’s a whole other story about how the event manager at that show played with the heating and air conditioning over the course of three hours to make sure it was a sweaty rock gig that is worth buying us a pint for at some point. Especially if you’re in the sweaty rock gig making game.

We need to do something about curfews though, seriously. If you clear The Zanzibar at 11.30 at this time of the year your punters end up on the madness of Seel Street the week before Christmas.  And no one needs that.

As it was, Shards were the first of three on a night that saw a much-anticipated headline show by this city’s most mysterious three-piece Shards are an interesting little four piece. With a drummer straight out of Seattle, an astronaut for a bass player, a mod guitarist straight out of Carnaby Street (The resident wool, apparently) and a singer adorned in a boiler suit, they’re a visually interesting prospect if nothing else.

We weren’t sure about the boiler suit to be honest, maybe the singer was late from another job. Plumbing something in up in Allerton somewhere. The 86 is known to struggle on a Saturday.  Who knows.

Their set is a short, snappy affair. Hometown was a high for us, and their new single Reflections, a gentle, bass driven ballad of sorts, though ballad probably isn’t a fair description. It is essentially a love song but one that suggests that all may not be well on the horizon for our love torn twosome.  Its a lovely thing.

Who Ya Talking To amused us no end, a song about that moment where you really cannot be arsed continuing a conversation with someone really should have had its own song before now. Cheeky in all the right places and something we certainly felt an affinity with.  All in theirs was a perfect set, different enough to keep you interested. It’s not exactly moshing music but not the kind of thing that would drive you to bed with a bottle or two of red and 40 Regal king size.

Monks are a 90s band transplanted to 2018 to remind us of the good times, the good old days. It could be the twang, it could be the 12 string, it could be the Korg or the addition of the trumpet.  They probably all help. Alternatively, it could be the flares, the shirts or the trainers, however, you look at it they fit the bill perfectly. It could, on reflection, be the copious amounts of red wine on stage but who’s counting?

There’s clearly an attempt by Evol to loosen everyone up as the gig sneaks toward The Mysterines, Monks create anthemic sounds for just about everyone, stand out tracks for us were Walkman and Ponderosa, Ponderosa for the reason that it reminds us of the highest bar in the North of Ireland, probably.

Most of their set though seemed directed at the two lads in the front who danced like loons all night, especially to their final track, Sundried. Not bad for this hour frankly. Especially given the calls for an encore, though that was drowned out by The Beatles being piped through the house PA.  Lads, that’s more than a tad predictable

At the time, we weren’t sure if My Delilah by Tom Jones was the intro to The Mysterines but the singalong it generated would suggest it probably should be. It is a fantastic piece of work, though I’m not sure anyone would want our undies chucked at them. That was followed by Rebel Yell by Billy Idol, which was another blessed relief from the Beatles. In the end, it was the Disney theme tune that made us decide to hang the DJ.

We’ll not even name it.

As a point of order, a pal of ours has just finished penning what we imagine will be an eye-opening tome for any wannabe rock stars. Phil Taggart‘s Slackers Guide to the Music Industry will hit the shelves at the start of the Summer next year.

Let us start you off. The rise to the top is nowhere near as glamorous or swift as you imagine. It will involve hours and hours in a studio arguing over drum sequences or finding the right bird sound for your lovelorn ballads opening notes, it’s that bad.

It will involve spending an interminable amount of time recording something that will cost you about as much as a deposit for a small house and praying someone decides to pick it up, distribute it and that some poor sucker at the other end will buy it. And, more importantly, love it.

There will be whole days of abject boredom, spectacular amounts of time trying to sleep in transit vans and gallons of hideous cheap beer. There will be nights spent in motorway laybys and crap hotels. Or hostels, If you’re really lucky. More importantly, there will be uncountable hours spent ‘content creating’, knocking your socks off to build up some kind of following before you hit the road, searching for likes and ❤️’s.

It’s fucking tiresome. And to be frank, it rarely works.

And yet, this is where the Mysterines differ from most. Whoever is directing their rise to the top, and rise they will, they’ve thrown their own version of the slackers guide out the window.

And yet here they are selling out fairly respectable venue of a Saturday evening. It’s not that there hasn’t been promo, there has, it’s just been very clever at getting you off your arse, off the sofa and out to find out just what a Mysterine is exactly.

And what they are is bloody good.

By the time The Mysterines landed on stage, there was barely room to move in the bar. No one seemed wildly bothered by the DJ at any rate. There’s a surprising amount of noise from these three, lots of vitriol, lots of screaming and it is all wondrous. They have a sound of their own, its proper rock and roll, a smidgen of grunge and a bucket of attitude. In their opener, Good Conditions, they lay out their stall, tons of noise, tons of energy, and a relentless desire to speak their mind.

Hell, there was actual moshing involved midway through their set, which seemed to amuse the trio no end. The band gives it their absolute all, the guitarist screaming for the people, Lia Metcalfe giving every ounce of will and energy she has, and their drummer going hell for leather in the back.

It’s a joy to watch.

Highlights for us were Resistance, Hormone and their last number, Gasoline, where it got properly rocky, they were throwing themselves around the stage like madmen, and we hope whoever was on the receiving end of the flying mic stand is recovering well at home.  To be fair, we imagine there are a few who should hopefully be recovering at home. The only thing that seemed to bother anyone was that their set was altogether too short, the stage being cleared a whole five minutes before curfew.

As a homecoming, post tour show, The Mysterines showed everyone just what they’re made of, it’s good stuff, it comes from good stock, has some good people behind it and rarely bothers the social pages. That’s a pretty good record this early on.

We just hope Philly has included a chapter in the Slackers guide that explains how to annoy the venue, local licensing agencies and occasionally surprise the soundman. It’s not proper rock and roll until you misbehave. But take heed, leave the hotel TV where It is, that comes out of the house deposit in the end.

(It was The Fall that welcomed The Mysterines on stage, for anyone keeping track) 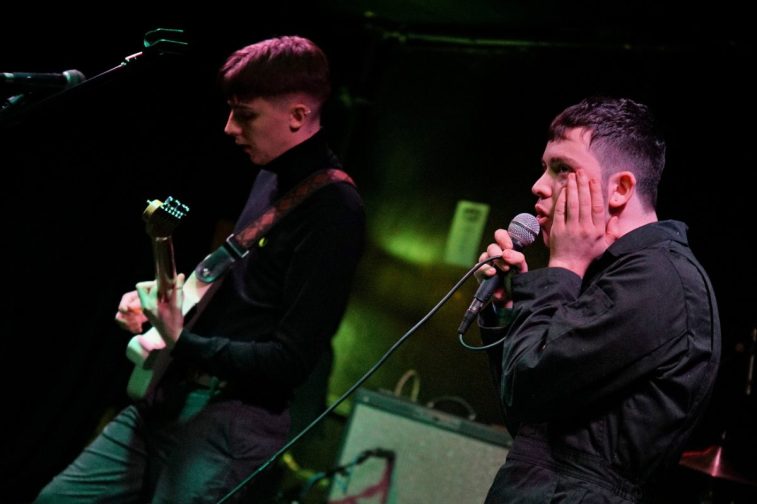 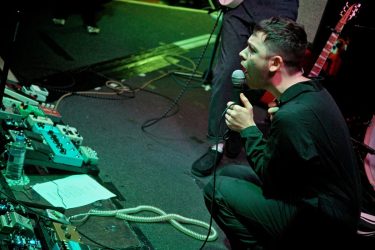 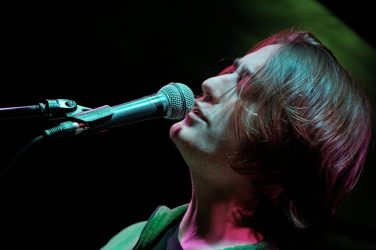 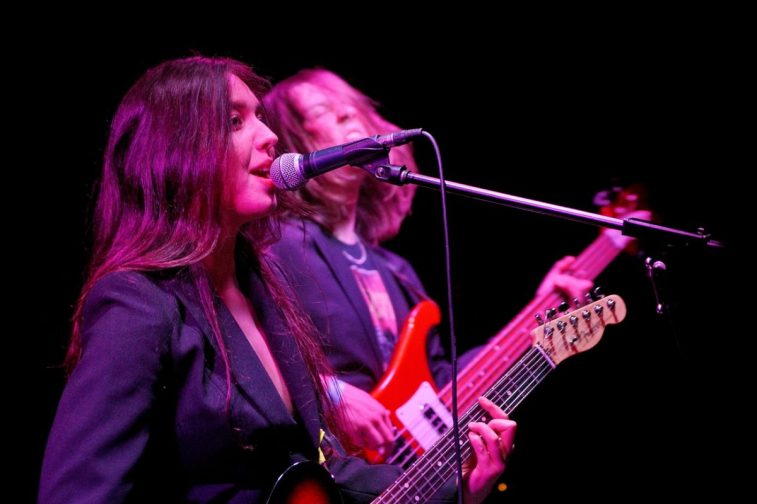 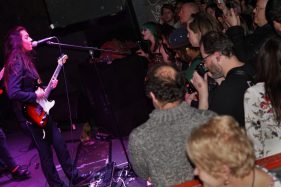